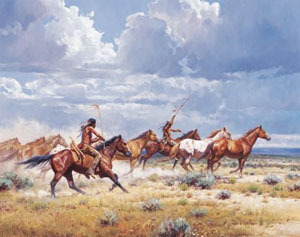 Available in other editions! Call 303-333-1592 for more information. "In his book, 'No More Buffalo', Bob Scriver tells with a fictional story how the Blackfeet described the first horse that they saw. Some said it looked like the elk, being about the same size and color, and others had seen it in distant Indian camps being used to pull the travois - like the dogs that were used by the Blackfeet. So, according to the story, they called them 'Ponokah-Eemetah' in their language, which translates to Elk-Dog in English."
More Artist Martin Grelle Limited Edition Giclee on Canvas Fine Art
Do you have a question?
Visit our Brick and Mortar Gallery in Denver (Cherry Creek North), CO