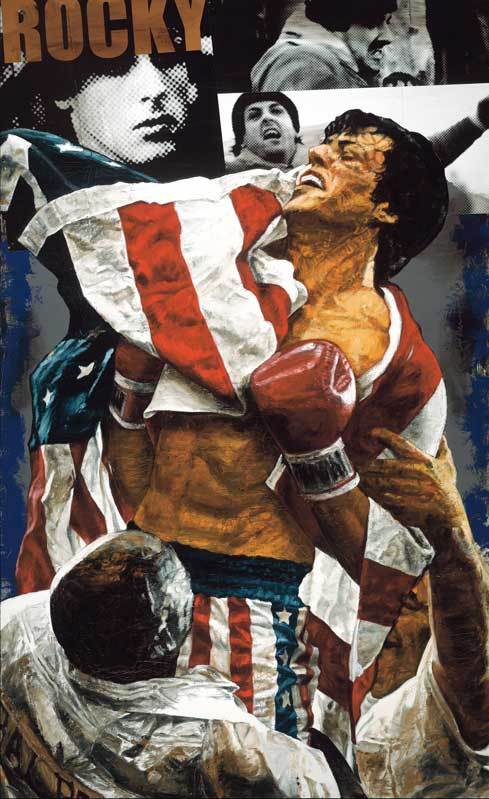 **Hand Enhanced, "Rocky" was published in 2014. The Giclee is Signed and Numbered by Stephen Holland and also Signed By Sylvester Stallone!

At the base of the famous steps that lead up to the Philadelphia Museum, there is a larger then life bronze statue of a boxer, raising his arms up in humble victory. It's a monument to a distinctly American folk hero. Sure, some will sneer "he's a character from a movie". And, as much as they'd be factually correct, they will have missed it's greater truth. Rocky Balboa, unlike any other figure (fictional or not), embodies the very essence of what is held dear by Americans as the best of their character.
Rocky was a story about a man who had next to nothing going for him. So limited by his options, his survival at times was dependent on taking work that went against his own moral fiber. But, despite all the forces of his environment working against him, he prevailed as a virtue of his own inner being. And, what he won in the end was the reward of his own integrity. Rocky was not a story of a winner, it was the great American parable of hard work, persistence, and unrelenting spirit of one person's will.

This parable is what spoke to artist Stephen Holland the most, when he was approached with the opportunity to work with Stallone on this important project. Holland himself, is no stranger to similar early circumstances experienced by Rocky. Having grown up in a family of four living in a one bedroom apartment, in a working class corner of the Bronx, to parents of limited education and even less means; the possibility of him having become one of the most noted artists of his time, was as unlikely as becoming an astronaut or the president. But here too, it was an individual's fully committed investment into their own worth, that eventually defeated all foreseeable odds.

For Holland, his own life's story has always been what has guided his artistic approach to his subjects. No matter how big the icon of sports, film, music, politics or even fiction, Holland's subjects have been, he's always seen his portraits as ones of his subject's fundamental character. As it's this, and this alone that Holland knows to be the source of their genuine greatness.

The most consistent thing said to Holland by his celebrity subjects has been "Wow - you really got me. How did you do that?" This is not about how well he's captured likenesses, that's something more than one great painter can achieve. It's something much more. It's about Holland's ability to find the true inner nature of his subjects, and bring that to the surface with his paint. It's that special ability that has brought Holland the opportunity to paint one iconoclast after another. Just in the world of boxing alone Holland has been asked to paint just about every major name in the history of the sport; Tyson, Leonard, De La Hoya, Chávez, Klitschko, Marciano, Frazier, and of course Muhammad Ali (just to name a few). So it only makes perfect sense that this list should also include the most famous fighter of the screen as well. And, for Sylvester Stallone to have contributed his own signature to the work, makes it all the more special.