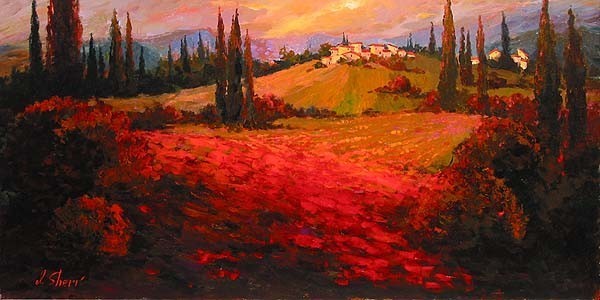 Irene Sheri was born in the city of Belgorod-Dnestrovsky, Ukraine in 1968. Her mother was Bulgarian, father French. Her art career started at the age of four, completing thousands of paintings before the age of 18. In 1990, Ms. Sheri graduated valedictorian from the Serov College, and was asked to stay at the School of Fine Art to teach gifted children. Two years later, she into entered one of the most prestigious art schools in the world, the St Petersburg Academy of Art named after Repin. In 2000, her graduation artwork was accepted into the permanent collection of the Museum of Academy of Art, and a year later, the same painting, "Early snow" (78" x 80") received the highest honor an artist can receive in Russia, the "Russian State Award for Outstanding achievement in Art or Entertainment". In 2002, Ms. Sheri was invited to take part in all-Russian juried exhibition "Youth of Russia", and again, as it was each time she entered juried exhibitions, she received first prize and special commendations. Her artwork is sold and presented by galleries and dealers in France, Italy, Germany, Belgium, Russia, Ukraine, Finland, and the US. A giclee (pronounced zhee-CLAY) is an individually produced, limited edition, high quality reproduction done on a special large format printer. Images are generated from high-resolution digital scans and printed with archival quality inks. Giclee prints can be printed on a number of different media - watercolors can be reproduced on watercolor paper, for instance, and can be so color-true that they are virtually indistinguishable from the original. Oil paintings can be reproduced on canvas. The giclee printing process provides better color accuracy than any other means of reproduction. The colors are brighter, last longer, and are so high-resolution that they are virtually continuous in tone, rather than tiny dots.
More Artist Sheri Limited Edition Giclee on Canvas Fine Art
Do you have a question?
Visit our Brick and Mortar Gallery in Denver (Cherry Creek North), CO