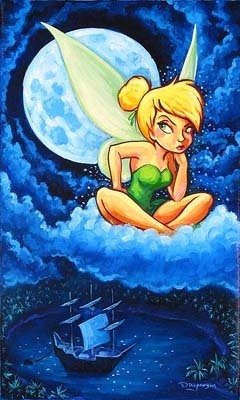 As a rising star in the art world, Tim Rogerson casts his artwork with a very evident energy and passion. Inspired by the works of Edgar Degas and Malcolm Liepke, the North Carolina native has embarked on an artistic journey that has taken him from Degas to Disney to darling of the industry. Born in Kissimmee, FL, Mr. Rogerson was forced to move with his family to North Carolina at the age of four because of family health concerns. His father, who at the time, was employed by Walt Disney World as Show Director in charge of managing and maintaining all of the performances in the park, made every day a magical adventure for the future artist, even though they no longer had the safety umbrella of Disney. Mr. Rogerson grew up living the everyday life of a kid, playing outside and "hanging out" with friends, however, the artistic urge to create was always present, compelling him to apply the pictures and images in his head to paper and canvas. Every child has a dream. For Mr. Rogerson, it was to be an artist as well as satisfying his desire to return to his home-state; back to the magical kingdom from which he came. Of course being surrounded by the whimsical images of Disney characters, even after his family moved to North Carolina; his father was an avid Disney collector and supporter, didn't help curb his appetite for the Sunshine State. However, it was these images that helped form some of Mr. Rogerson's style, which has begun to earn him critical acclaim. A giclee (pronounced zhee-CLAY) is an individually produced, limited edition, high quality reproduction done on a special large format printer. Images are generated from high-resolution digital scans and printed with archival quality inks. Giclee prints can be printed on a number of different media - watercolors can be reproduced on watercolor paper, for instance, and can be so color-true that they are virtually indistinguishable from the original. Oil paintings can be reproduced on canvas. The giclee printing process provides better color accuracy than any other means of reproduction. The colors are brighter, last longer, and are so high-resolution that they are virtually continuous in tone, rather than tiny dots.