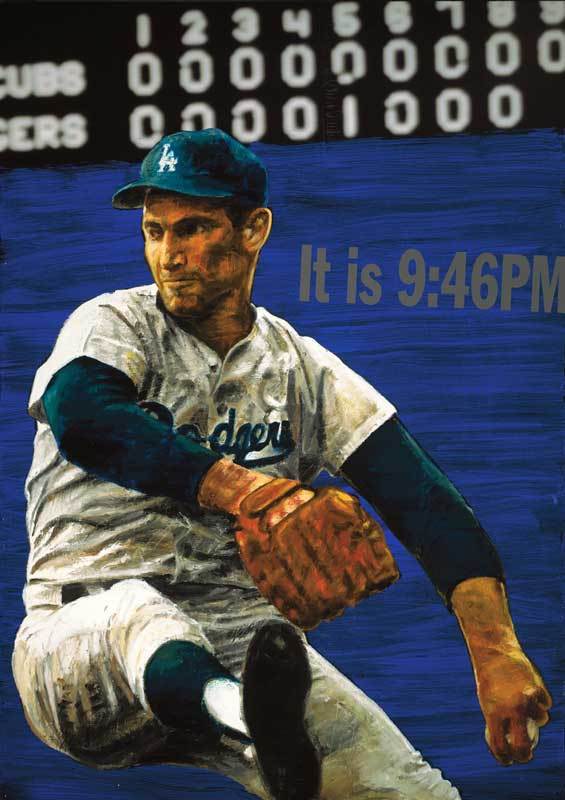 In this most recent painting of Sandy Koufax, Holland wanted to pay tribute to a moment that stands out in his amazing career and has never been painted before, the time he pitched his perfect game. Imagine sitting in the stands, or watching on TV. You've seen two unbelievable pitchers take turns inning after inning, watching three batters at a time come up and three batters one by one go down. For half the game both teams (Cubs vs. Dodgers) are in route to their own "perfect game," until the Dodgers gain a one base hit. But Sandy continues to push on. And now we stand in the ninth inning, still not one base reached by the Cubs, two outs and two strikes have been called one right after the other. Every fan sits on the edge of their seats, all their ears can hear is the play by play from Vin Scully, and all their eyes can focus on is the ball in Koufax's hand. Up until this game Koufax was in a loosing streak, and now he prepares this one last pitch that would make the difference of achieving the greatest feat that can be performed in baseball or... In the next fraction of a second the batter misses, Koufax is still coming out of his windup and in the air the voice of Scully announces "It is 9:46pm", so that every fan would know that on September 9th 1965 at that time, they knew exactly where they were. The fans, the players, and all of baseball lived in a bubble floating above the noise of all else for that one moment that lives by itself in baseball history. To honor this, Holland chosen to handle this painting with a tone of simplicity as to offer artistic reverence to a moment. A moment where time almost stood still. He's surrounded Koufax with nothing more then the empty quiet sea of Dodger Blue. Floating to the right of Sandy are the infamous words of Scully "It is 9:46pm", and above the pristine row of zeros.