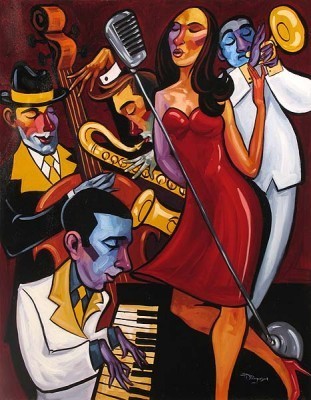 As a rising star in the art world, Tim Rogerson casts his artwork with a very evident energy and passion. Inspired by the works of Edgar Degas and Malcolm Liepke, the North Carolina native has embarked on an artistic journey that has taken him from Degas to Disney to darling of the industry. Using the medium of oil paints, Mr. Rogerson focuses on capturing people in social settings, "My work will always evolve, becoming more complex and detailed," says Mr. Rogerson. After Rogerson graduated from Ringling University in 2004, he contributed his artistic abilities to Disney and SS Designs in Florida. Currently, Mr. Rogerson is taking the art world by storm with his whimsical imagery for Disney Fine Art and this summer's launch of Tim Rogerson's Cosmopolitan POP: A Series of Paintings About Everyday Life and the Games People Play; a series of collections of works that showcase the lighter side of life. "I want my paintings to celebrate life and stay fresh . . . I try to stay away from the basic routine and technique because my joy for painting comes from the challenge of creating something entirely new," says the artist about Cosmopolitan POP. In preview, this series has already won critical acclaim by the trade and his peers.
More Artist Tim Rogerson Limited Edition Giclee on Canvas Fine Art