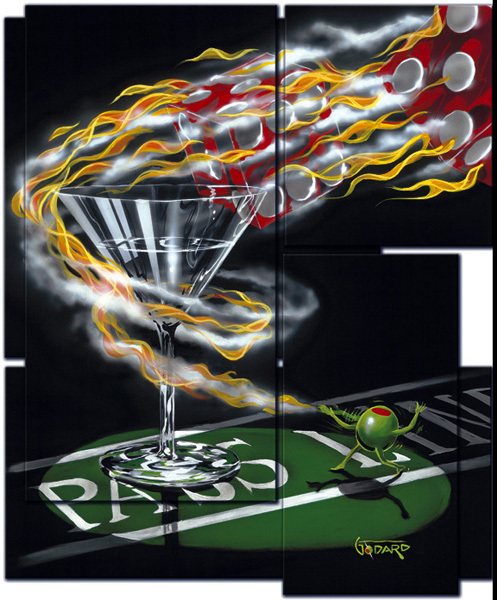 Burning It Up (Mosaic Mural)

Michael grew up in Las Vegas near the Nevada Test Site, which is probably where he gets the twisted visions that he paints. He is widely recognized as one of the most versatile artists of our time. Michael was the first California artist commissioned to do Cows on Parade that was featured on Oprah. He has also appeared on ABC, NBC, OCN, KOCE, KCET, Evening Magazine, and the Christopher Lowell Show on the Discovery Channel. He was commissioned by the Double Platinum Rock Band Dishwalla to do the cover of their third album Opaline. Godard's works can be found in numerous selected art galleries, homes and businesses throughout the US and Japan, and many celebrities like Arnold Schwarzenegger own his pieces. Although the themes vary, Godard's art changes the face of even the most traditional subjects, creating mood and mystery on canvas, that at times are painted so realistically you feel as though the subjects will reach out and touch you. Godard finds a unique way of unfolding this delicate balance of texture, color, technique, realism, humor and imagination to evoke drama and emotion. No matter what the subject, from crocodiles cruising convertibles, olives jumping in martinis, to grapes chasing corks, one thing gallery owners and the public agrees on, Michael Godard's paintings are incredible!