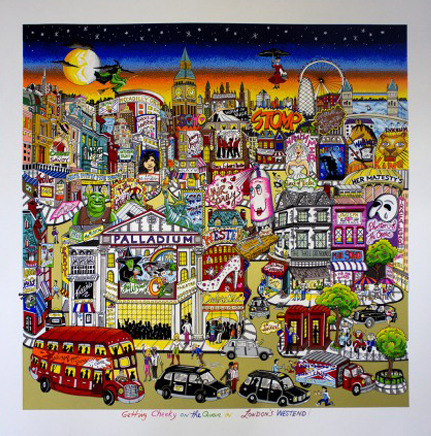 Getting Cheekie in the Queue in London's West End (DX)

Getting Cheeky in the Queue in West End London was conceptualized by Charles Fazzino when he was in London for the Olympic Games in 2012. "I was in London for ten days, making appearances at the USA House, the American School in London, and the Procter & Gamble Family Home. I took an afternoon off to play tourist and found myself in the audience at ‘Jersey Boys" in the West End. I loved it so much and the atmosphere in that area of London reminded me so much of Broadway, that I just had to make it my next London release. I hope you enjoy it." - Fazzino

Charles Fazzino's first limited edition release about London was actually just called "London" and it was a lithograph released in 1991. Since then he has created dozens of limited editions and original pop art paintings about the Royal City.

Getting Cheeky in the Queue in London's West End is a 2014 release. This is also available in the PR edition of 100 with the black background, 23" x 24" image size.

Please contact the gallery at 303-333-1566, or info@fascinationst.com, for more information.