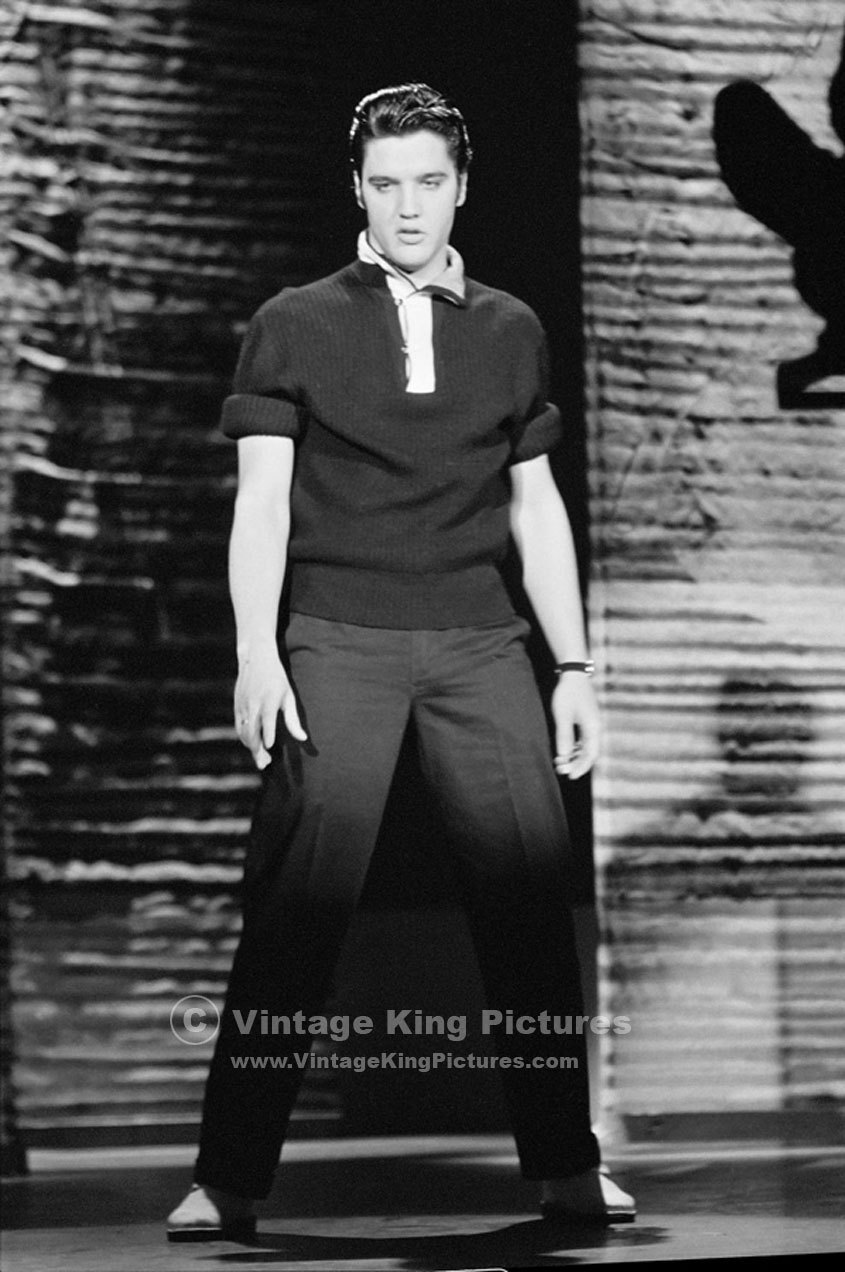 No Tax on All Purchases Outside of Colorado. Ask About Free Financing!

No Tax on All Purchases Outside of Colorado. Ask About Free Financing!

Dateline: October 28, 1956
Up and coming music idol Elvis Presley appears live on the CBS hit variety program "The Ed Sullivan Show. This was Elvis's first appearance in CBS's New York studios with Ed hosting, although it would be his second time ever appearing on Sullivan. Presley's first engagement on the show was accomplished via live feed from Los Angeles with actor Charles Laughton guest hosting in New York while Sullivan recovered from injuries suffered in an automobile accident.

Also on set that day was 22-year-old professional photographer Richard Weede. His father, famed opera baritone and musical theater star Robert Weede, was to appear along with the cast of the Broadway hit "The Most Happy Fella" on the show that night. The younger Weede obtained permission from CBS brass to be on premises and to photograph all the performers during daylong rehearsals prior to the live airing that night.

Sullivan had been reluctant to invite young Elvis to appear on his show known for its wholesome family-oriented content. Well aware of Presley's hip shaking shenanigans in past performances, the CBS censors as well as Sullivan pleaded with Elvis, in the name of decency, to tone down his act for the live airing that evening. Despite assurances to the contrary, when show time arrived, this original rock rebel sang up a storm as he loosed his pelvis on the millions of shocked viewers across America. By all reports, Sullivan was less than amused. During Presley's third and final appearance on Ed's show in January, 1957, the cameramen were given strict instructions to shoot Elvis only from the waist up. Ed would take no chances on more hijinks from the irreverent young megastar.

"I spent most of the day," recounts Weede," backstage with Elvis and snapped these photos with available light and a hand-held camera. Little did I realize at the time I was capturing a truly unique moment in rock and roll history involving arguably the most famous music icon of his or any other generation."

Fast Forward: Present Day
So, what became of these historic photographs? For a very long time, precious little!

Richard Weede, by his own admission, was not a huge fan of Elvis when the photographs were created.
"I had been raised in and around the world of musical theater and opera. It was not unusual for me to come home from school and find my father giving singing lessons to the likes of Mario Lanza. I didn't even really know who Elvis was at the time and I certainly had no great affection for songs such as Hound Dog. If I had known then what I know now, who Elvis Presley was about to become, obviously I would have shot roll after roll of the young star. It is amazing to me the photos I did manage to create are now being regarded as a pictorial essay of a seminal moment in rock and roll history as well as a commentary on censorship in America at that time. The series of shots where Ed has his back to the camera and is leaning toward Elvis obviously lecturing him and the expression on Elvis's face proves once again that a picture can be worth a thousand words."

At the time, however, Weede was so little impressed with his subject that he printed just a few of the negatives, stashed what prints he did develop and the negatives in separate boxes, then deposited those boxes among countless others which accumulated over 50 years of work. In his garage... where they languished unseen and unpublished for 51 years!

Then one evening in early February, 2007, Richard Weede's son and a friend, both musicians themselves, were engaged in a discussion about bands and performers they had liked over the years. The friend casually mentioned that his 11-year-old daughter was a huge Elvis fan and how the King had managed to transcend generations with his enormous talent and charisma. Weede's son replied that his father had taken some photographs of Elvis during one of his appearances on the Ed Sullivan show and that he believed they were lying around somewhere.

Intrigued to say the least, the friend asked if he might view the photos. Weede's son rummaged through a stack of clutter on his kitchen table and soon produced a somewhat tattered manila envelope. When his friend examined the contents of the package his eyes nearly popped out of his head. In his hands was a treasure trove of rock legend in the making. Anybody who ever knew anything about Elvis had heard of the Sullivan shows and how they had defined Presley as the original, quintessential, bad boy rockabilly rebel. One of the most significant events in Elvis's meteoric rise to super stardom had been documented indelibly in gorgeous black and white images and could now finally be shared with his millions of fans all over the world.

Post Script:
The original envelope mentioned above contained only five developed photos. After convincing Richard Weede that the photos he had created were truly remarkable, not to mention truly valuable, he was persuaded to embark on a search for those pictures still missing, as well as the original negatives. Over a period of several months, more and more photos were recovered from the boxed archives in his garage, but still no negatives.

Then in late October, 2007, disaster struck. The worst wildfires in California history raged out of control and Weede's home in Escondido was at the epicenter of the inferno. Hundreds of thousands of acres and several thousand homes were reduced to ashen wasteland. More than one and a half million Southern California residents were forced to vacate their homes under mandatory evacuation notices. Richard and his wife Peggy were among those forced to flee.

On October 21 at approximately 11:30 p.m., they received a phone call telling them they had an hour to get out. As the flames, fanned by fierce Santa Ana winds, swiftly crept up the hill behind their home, the couple first transported their two horses to safety, then packed a few scant belongings into their car and prepared to leave.
In spite of the encroaching danger, Weede convinced his wife they should make one last ditch effort to locate the missing negatives. Miraculously, they found them at the bottom of the last box they had time to search before beating a hasty retreat.

A little more than a week later, when the worst of the fires were at last contained, they were allowed back up the hill to their homesite to survey the damage. Nearly every home in the neighborhood had burned to the ground, as had their horse barn and tool shed. Their house, though suffering extensive smoke and water damage, remained standing.
"We had a home to come back to," said Weede later. "And we found Elvis. Some things were just meant to be."

Vintage King Pictures exclusively allows Fascination St. Fine Art to sell these amazing collectible photographs.
Remember: There is NO Tax on All Purchases Outside of Colorado. Ask About Free Financing!

The Conversation (Set of Three)

The Conversation (Set of Three)