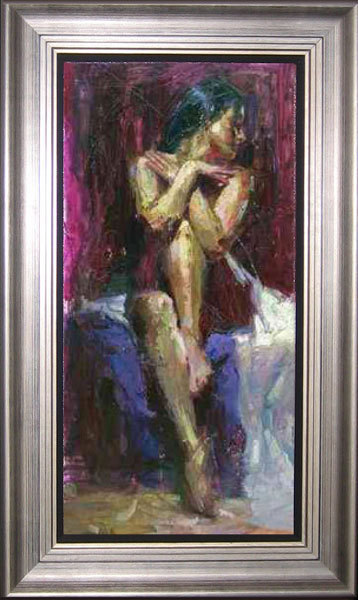 Since the beginning of time, varying cultures have deified beauty in female form: Aphrodite in Greek mythology, Lakshmi in Hindu mythology and Venus in Roman mythology to name a few. Although some may argue that beauty is in the eye of the beholder, a mysterious, yet universal enchantment of all woman remains. This primal dynamic is what inspires the eminent works of contemporary painter Henry Asencio. In the artist's most recent series entitled, "Beauty Unfolding", Asencio celebrates the inherent beauty found in ethnic diversity and the way in which these subtle differences define our ideals of female beauty. The current series of five works is a tribute to women from various cultures from around the world. Through his soulful and artistic insights Asencio sets out to capture what each of these women bring to the world at large. What you may notice are the physical nuances of her charm, the tone of her skin, the shape of her face, the curve of her eyes, or the color of her hair, but it is her inner beauty defined by her heritage, culture, language, and beliefs that is the true essence. Ultimately, Asencio paints a collective portrait of feminine majesty in its multidimensional, natural and poetic splendor. At a glance you may recognize her, for she represents all that is beautiful culturally. As her Beauty Unfolds she bestows a universal grace that cannot be denied.