Troy Carney - No Tax on All Purchases Outside of Colorado! Ask About Free Shipping & Free Financing.


Born in New Zealand, Troy Francois Carney was inspired at an early age by an exotic life of travel through Asia and the South Pacific. His mother is a fine artist and his step-father a professional surfer and surfboard shaper. As a family they traveled in pursuit of surf and artistic endeavors. Troys aspirations were shaped by the beauty and artistry of the diverse cultures of Bali and Indonesia, Asia, and Polynesia. In 1979 his family fell in love with Kauai, Hawaii, where Troy attended high school. He finished his education at Mount Maunganui College, NZ, where he received the Ranui Memorial Award for excellence in art, a prestigious Maori organization acknowledgment. The Maori and Polynesian cultures ignited Troys creativity and have motivated his work ever since.

After living in Hawaii, Australia and New Zealand, Troy settled back on Kauai in 1992. Troys skilled artistry airbrushing surfboards gained him recognition throughout the Islands, being extensively published in industry magazines and featured in many movies. His early exposure to the textiles craft in Indonesia led him to become the art director for Fusion Hawaii and Indah, both island based clothing companies. Troy also gained expertise in finish carpentry, which began as an effort to help rebuild Kauai after hurricane Iniki, but evolved into yet another art form.

Troy integrates all of his experience into a unique process he has used since 2004. Using Japanese knives, his technique involves hand cutting 12-48 layers of texture on wood resulting in a bas-relief that is gilded with 12k-24k genuine gold and finished with traditional oils and rich glazes. His romantically realistic style features exotic elements and sacred symbology.

Since the beginning of 2017 Troy Carneys art has evolved and entered another new chapter. By applying multiple thick layers of clear art resin in between the layers of art his work now has more depth and shadows. 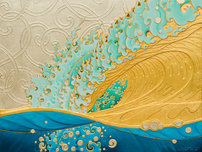 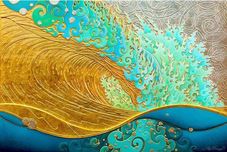 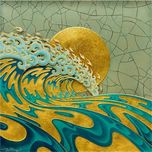 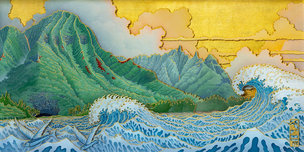 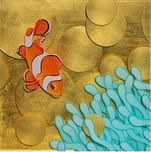 Wailani - Water from the Heavens