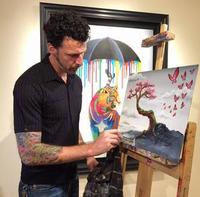 The paintings of Michael Summers take us into a crisp and colorful world, alive with nostalgia, splendor, and whimsy. Within each vibrant scene are playful reminders that our everyday lives are filled with wonder, beauty, and magic, if only we allow our eyes to see it.

Michael Summers was born in Los Angeles sometime during the Carter administration. He grew up in Joshua Tree, California surrounded by a cavalcade of eccentric art-commune inhabiting social dropouts, idealistic dreamers, and rural American free thinkers. Art and creativity surrounded Michael from an early age and has been a pivotal part of his identity throughout his life. Summers left home in his early twenties and after drifting from Virginia, to Missouri, then Texas, he returned to San Diego, California where he currently lives and works.

The meticulously crafted paintings of Michael Summers are firmly rooted in contemporary west coast surrealism with a strong pop sensibility. He uses his Pop Surrealist style as a tool to reflect his inner vision: creating the impossible and more importantly, making the impossible seem plausible. The artist creates imaginary characters - often alluding to mythical archetypes - in acrylic paint with a keen hyper-attentiveness. His unorthodox use of intense saturation and arbitrary, multi-chromatic hues encourages the viewer to look a little closer, a little longer. The recognizable subjects of animals, automatons, and humans suddenly become magical and extraordinary. Yet, they somehow still retain the nostalgia of a child-hood memory that was once long forgotten.

A Little Help From My Friends (AP)

A Little Help From My Friends (SN)

Be True to Yourself (AP)

Be True to Yourself (PP)

Be True to Yourself (SN) 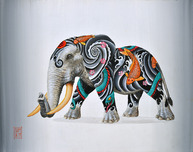 Original Acrylic on Board Michael Summers

Original Acrylic on Board Michael Summers

Shake It Off (AP)

Shake It Off (PP)

Shake It Off (SN)

Limited Edition Giclee on Canvas Michael Summers
Do you have a question?
Visit our Brick and Mortar Gallery in Denver (Cherry Creek North), CO